What the IPCC Special Report on Global Warming of 1.5°C means for Cities

As eighteen of the authors representing all 5 chapters of the Special Report on Global Warming of 1.5°C (SR1.5), we have produced the following Summary for Urban Policymakers to translate the report’s key scientific findings and policy observations for officials and policymakers of the world’s cities and urban areas.

Statement of Daniela Jacob on the report:
"Cities are already hot spots of climate change today. Half of the world's population lives in cities and metropolitan regions, which at the same time provide the largest economic benefits - and the trend is rising rapidly. It is clear that cities and urban areas play a key role in adapting to climate change and developing solutions to limit global warming to a maximum of 1.5 degrees above pre-industrial levels. The report supports mayors and city politicians in becoming pioneers in the development and implementation of urgently needed measures." 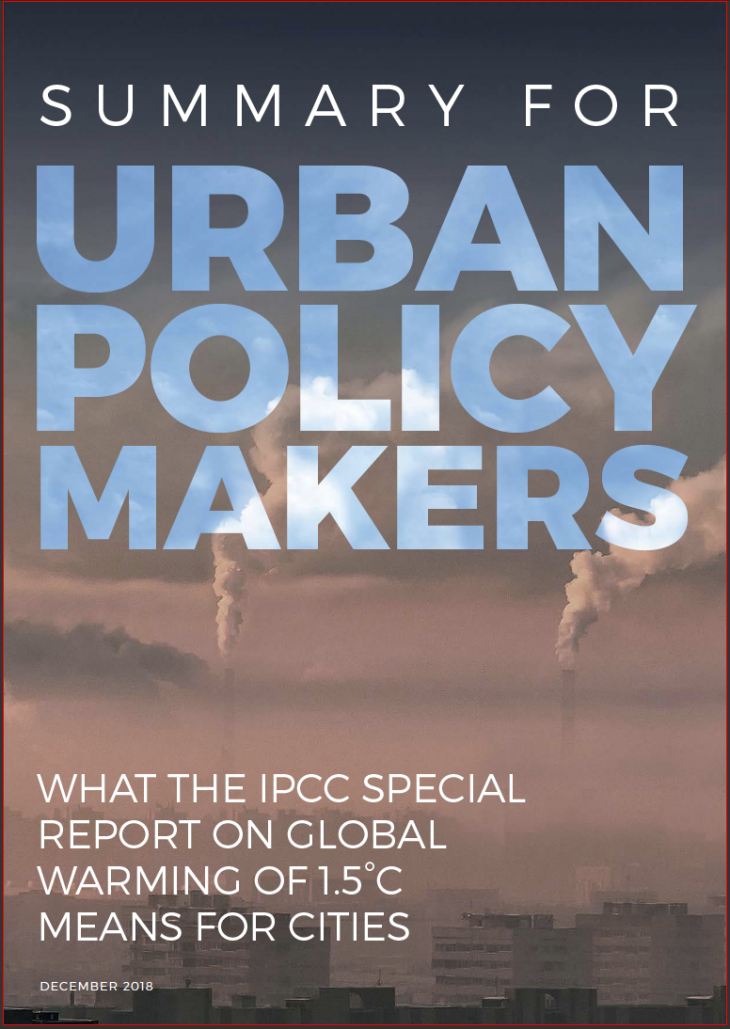 Though the SR1.5 primarily speaks to national and international decision-makers, we have produced this synthesis for a simple reason: climate science must be accessible to urban policymakers, because without them, there will be no limiting global warming to 1.5°C. In cities and urban areas, there are actions that policymakers—along with residents and stakeholders, such as civil society, the academic community, and those in business and finance—can take to help limit warming and adapt to the impacts of climate change. The effects of a city’s actions are not limited to its own borders or region, and, likewise, lessons learned in some cities and urban areas can serve as inspiration and resources for solutions in other urban areas.

This Summary for Urban Policymakers is synthesised from SR1.5, the Fifth Assessment Report of the Intergovernmental Panel on Climate Change (IPCC), and relevant supporting research. It builds on thirty years of science from the IPCC and climate diplomacy. The Paris Agreement, signed in 2015 within the United Nations Framework Convention on Climate Change (UNFCCC), committed signatories to maintaining global warming to well below 2.0°C above pre-industrial levels and pursuing efforts to limit this increase to 1.5°C. In 2016, the IPCC accepted an invitation from the UNFCCC to prepare a scientific report on the impacts of global warming of 1.5°C and related pathways to reduce global greenhouse gas emissions. Published in 2018, the resulting report is shifting the global conversation on climate change.

The SR1.5 identifies cities and urban areas as one of four critical global systems that can accelerate and upscale climate action, but recognizes this will require major transitions in how both mitigation and adaptation are undertaken. This Summary for Urban Policymakers has been produced in discussion with city practitioners and policymakers, as well as leading city networks and non-governmental organizations. It seeks to provide urban stakeholders access to the most advanced science on why the transition to a 1.5°C world is necessary and how it can be achieved.

In order to address these challenges, GERICS has for years been developing and applying innovative methods for integrating climate change into decision making and planning strategies. These approaches can be designed flexibly and according to individual needs. One such example of particular relevance to cities and local authorities is the GERICS - Adaptation Toolkit for Cities (GERICS - Stadtbaukasten). This toolkit can be applied to a range of different topics, and, working together with representatives from cities, used to co-develop novel approaches for adapting to climate change.
Further information on the GERICS - Adaptation Toolkit for Cities